Square Burger is the first Quick Service Restaurant (QSR) in the Empire Eats Restaurant Group's family. Empire Eats won a bid from the City of Raleigh, North Carolina to operate the restaurant that was planned as part of the renovation of Moore Square in downtown Raleigh which was completed in 2019. The grand reopening of Moore Square and the opening of Square Burger was April 3, 2019. The concept is modeled after burger stands of the 1950’s and 60’s.

The restaurant is named after its location in Moore Square, so suggested the tagline “Burgers, Fries & Moore'' which communicates the type of fare offered and plays on the name of its location by spelling “more” as “Moore.” With a name like Square Burger, the shape of a square is a natural element to incorporate into the branding, which I did in a number of ways throughout the brand system, such as the square shaped menu.‍

The logo icon is a simple and clever mark that establishes a casual and fun vibe that complements the streamlined menu and the restaurant's location within a park. The logomark is a stylized hamburger icon that doubles as a monogram of “SB.” The counter forms of the letter “B” are extracted and elongated to form the letter “B” creating a double decker burger. The burger “buns” are constructed from a squared, geometric letter “S” with the middle part cropped out to make space for the "burgers."

For the togotype, I used a typeface with slightly squared letterforms. I modified the letter “Q” so that it would sit better when the two words were stacked. The logomark leads the way for simple and fun brand elements like the food icons on the menus and the mascot character.

Most of the typography is set in varying weights of the typeface used for the logotype. A secondary script font family was introduced in the menu, signage, and some print materials. The style is a sign painter style similar to the type of hand painted signs used in retro soda shops, burger stands, and diners.

The color palette is limited to four colors, two shades of orange, a brown, and a bright blue. The orange and brown colors represent the colors of the burgers and buns sold in the restaurant.

The blue as an accent color injects some brightness and lightness to balance out the darker main palette. In addition to pairing well with both brown and orange, the blue represents the North Carolina blue skies guests will dine under as all seating is outdoors.

To infuse some more fun into the brand I created a series of mascot characters based on the main offerings of the menu. The main character is, of course, a square burger, named “Moorie.”

Moorie dons a Square Burger hat and holds a SQB takeout bag in one hand and holds the shake character in the other. The burger and shake characters are the main characters with the  hot dog character and a fry guy serving as the supporting cast. The great thing about having characters is that they are very adaptable and can be posed in a variety of ways in promotional materials. I have created a range of various poses for the characters. My favorite is the one I created to announce the availability of the Impossible (TM) burger (scroll down to see it).‍

I created food icons to highlight each section of the menu. All the icons are based off of a square grid and utilize square-off shapes as much as possible. The icons are also used in some accent patterns that I created as part of the brand system.‍

‍The brand was developed to be fun and clever, thus the brand voice is bit “punny.” It plays on words, as in the tagline and uses phrases like, “fair and square,” “square deal ” “What’s shakin’?” “Shake it up,” “Hot diggity dog,” “plenty Moore where that came from”, “the Moore you get, the Moore you want,” and “Come back for Moore.” I incorporated many of these phrases into the concept for the packaging and even created a pattern combining the phrases, characters, and food icons. 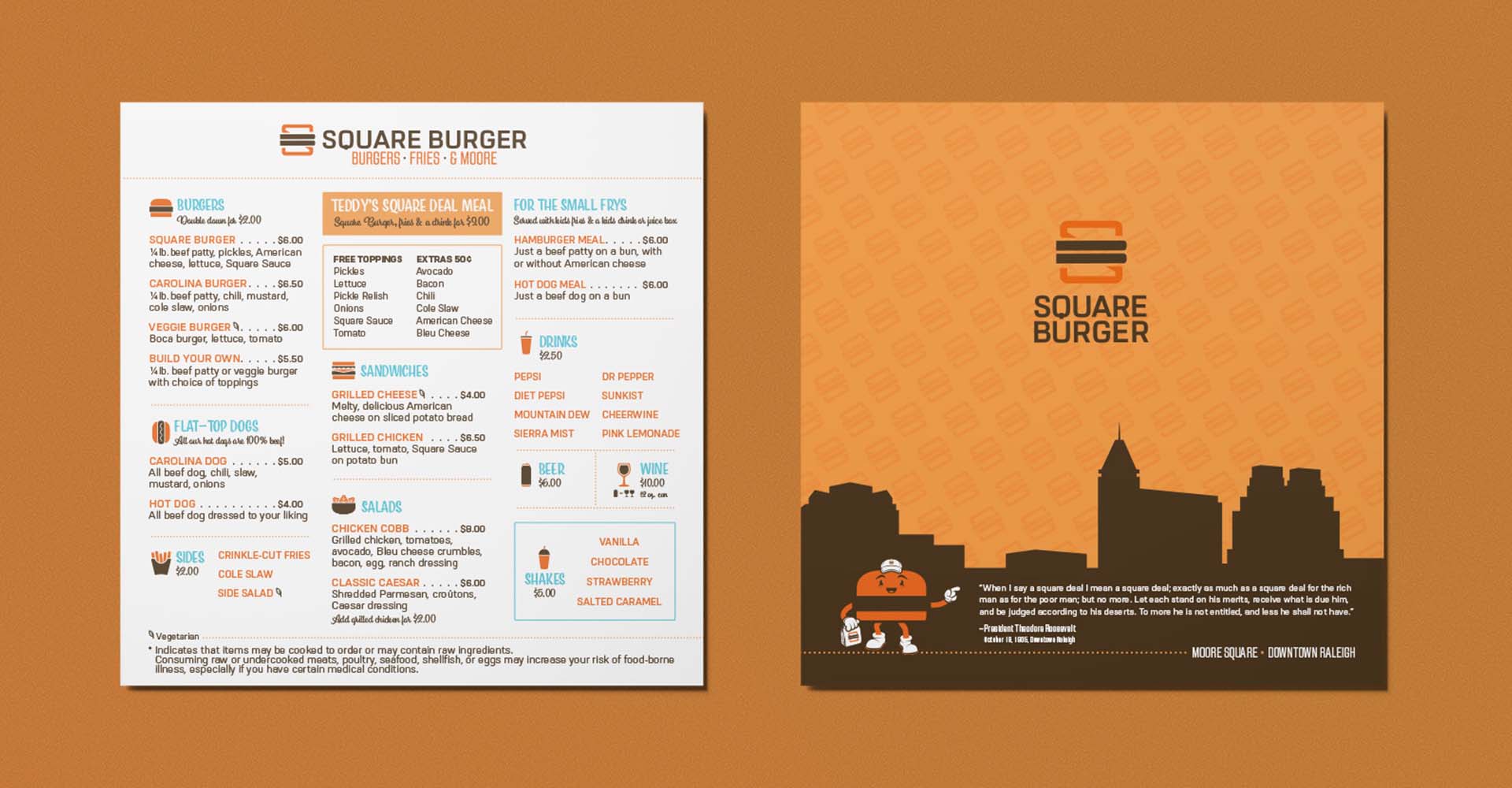 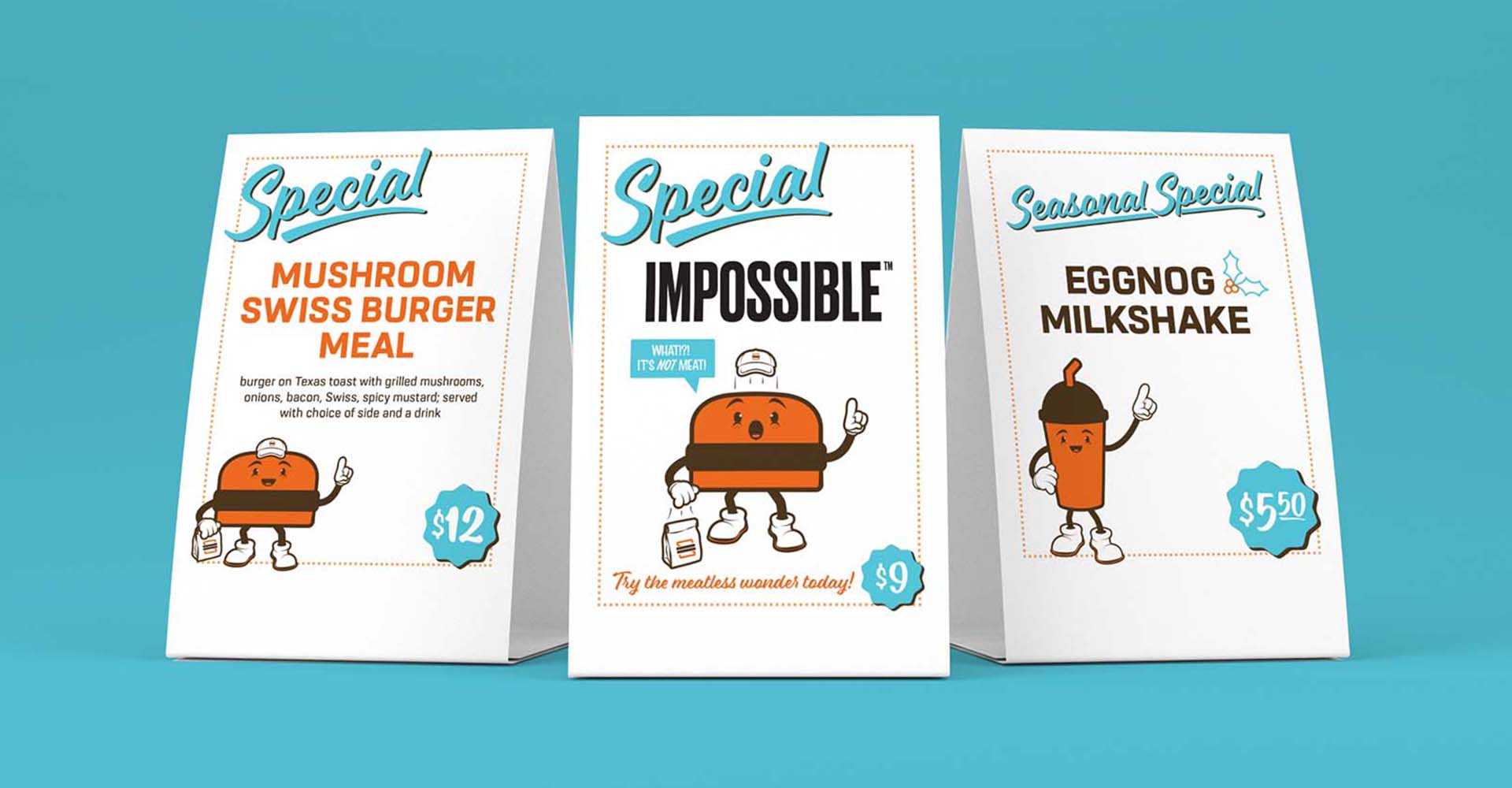