Since The Pizza Times is connected both physically and as a “sister" of The Raleigh Times, it made sense to carry over  the newspaper theme of The Times. The newsboy image in The Times logo comes from an old photograph (circa 1914) of the paper's newsboys standing in front of the building. Front and center in the photo the boy holds that day's edition of the paper. In the second row, there is a newsboy winking at the camera. I thought he’d make a perfect mascot character for The Pizza Times. I decided to recreate his likeness in a style inspired by vintage comics. Not a caricature but a simplified representational rendering. I created black and white versions using grayscale halftones as well as a faded newsprint, off-register version colored with halftones to emulate early printing processes.

Playing off of the newspaper connection and the personality captured in the old photo of the winking newsboy, I created the tagline “hot of the peel, “ a play on the “hot off the press” phrase the newsboy may have used to sell papers back in the day. (The large spatula that is used to place and remove pies from the oven is called a peel.)

I also used homonyms to create a secondary tagline “by the pie or buy the slice” that makes it clear that you can get a whole pie or just a slice. ‍

I selected a mix of four typefaces for the brand typography. Each has limited purposes to avoid being overwhelming. The main font is a geometric serif, Superclarendon. Since most newspapers print body copy in serif type, I wanted to use a serif font to emulate that fact, but I wanted it to have a little personality to match that of the pizza boy. Looking at old copies of The Raleigh Times newspapers, I saw the use of sans-serifs in headlines, so I chose Gotham as a secondary font to serve as a smaller headline or subhead. Industry Inc. is used for the display type. It is a layered typeface so quite versatile for “headlines” giving the option to easily create 3D text. It is also a geometric font so compliments Superclarendon well. I also wanted to use a script font in certain instances, serving as a “pull quote” style typesetting. Voltage was a great fit for this. It’s slightly angular curves mirror those of Industry Inc. and it has a bit of the personality of Superclarendon.

The logotype and the “To-Day’s News To-Day” phrase in the newspaper outline on the menu board are set in Modesto Poster Display. I wanted a strong, bold serif for the logotype, and when I noticed the counter of the “A” was shaped like a slice of pizza, I knew it was the perfect font to use. The  “To-Day’s News To-Day” phrase was the tagline of the Raleigh Times newspaper, the phrase can be seen in the photo of the newsboys and has been recreated on the same windows when the building was renovated to house the restaurant.

The interior of the shop is green and it has a large red glass covered board for displaying the menu. I used those colors for the pizza boy’s clothes and the brand's main color palette. Secondary colors were introduced to color the boys shoes and tights and the pizza slice the boy is holding in one of the mascot variations I created. 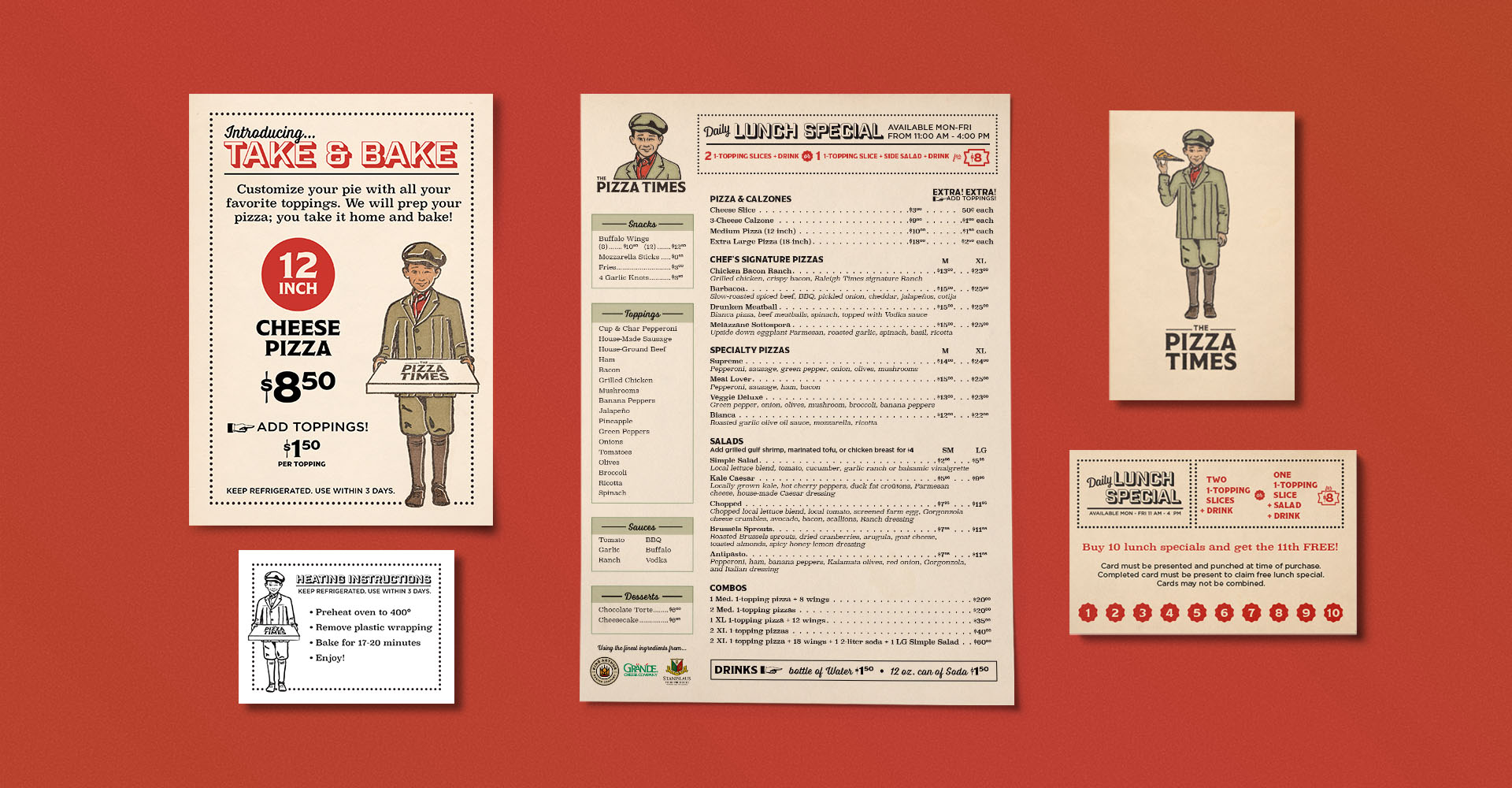